A Love Worth Waiting For

The Moon was in Capricorn when Leslie and Chuck got married. Capricorn is ruled by Saturn, a planet that represents age, responsibilities, delayed satisfaction, the hard lessons of life and the satisfaction that comes from learning those lessons, the restricting season of winter and the faith that spring will come again. Leslie had been widowed for 19 years. Chuck had never married. Scarred by a business betrayal and devastating loss, he focused on rebuilding his business and spent years caring for his mother until she died. They wanted their ceremony to reflect their faith and the spiritual connection that brought them together. For Chuck, that meant taking his vows on the Bible that once belonged to his father. The Winter Tree oathing stone symbolized the bride's enduring faith that after 19 years of widowhood, love would come again.

Leslie wanted to take her vows on an oathing stone inscribed with a winter tree, a symbolic echo of the Garden Goddess, the business she created many years earlier to help her survive her husband’s death.

Chuck and Leslie also chose to literally tie the knot by including a handfasting ritual. After the ceremony, she artfully draped the cord around his neck. Exuberant bride Leslie kisses her husband Chuck on the cheek! One of their wedding rituals blended sand and soil from four states, representing their childhood homes, their current lives, and the beach where they were married. 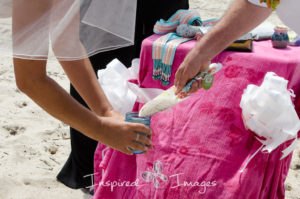 Leslie and Chuck blended sand and soil from the four states where they were born, lived, met, and married. The Wedding Wish Jar held wishes made on rose quartz hearts by their matron of honor and best man. This simple ritual often proves deeply meaningful for the honor attendants who have helped the couple navigate the road to this rite of passage.

My wish for Leslie and Chuck: May this year of wedding “firsts” celebrate your love and the faith that brought you together.

Thanks to photographer Jaime Lind of Inspired Images for these beautiful photos.

We can't say enough good things about Zita!! I felt an instant connection with her and she put together a beautiful ceremony for us despite a short planning time and working out of town a lot. She is absolutely the best in her field!! Thank you Zita!!