Even the shortest, simplest wedding ceremony deserves to be special. It is, after all, a celebration of love and a commitment intended to last for life. It was for these simple ceremonies that I created a ritual I call “The Wedding Jar.” 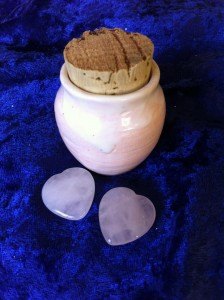 A Wedding Jar to contain wishes and blessings for the couple

I initially designed this ritual for same-sex couples who came to Connecticut where marriage equality is honored, where residency is not a requirement, and where there is no waiting period. I quickly discovered how easily the ritual can be adapted for use in traditional ceremonies, not only for the couple, but as a way to involve their parents, or the maid of honor and best man, or children when families are blended.

The ritual itself is deceptively simple, requiring only a jar with a lid and two or more small hearts made of rose quartz. Here are ceremony excerpts from two of my recent weddings.

Example #1 for the Couple
“Rose quartz is a special stone, known to release the ions that make people feel good. Many believe that, on an energetic level, rose quartz opens the heart chakra. That’s why the stone is associated with love. Barry and David, I invite you now to make a wish for your future. You can share your wish out loud or make it silently, to be shared with each other later. Either way, as you make your wish place a rose quarts heart in this wedding jar. On every anniversary, take out these two stones. Hold them. Remember the feelings you share today. On each anniversary, make a new wish and add a new stone.”

At this point, I gave two rose quartz stones to Barry and David. One at a time, each made a wish for their marriage and placed the stone in the jar.

Example #2 as a way to involve the Maid of Honor and Best Man
“In choosing her Maid of Honor, a Bride shares her dreams and her anxieties. The same thing happens when a Groom chooses his Best Man. Debra and Todd know—in a way that only they can—what our Couple has gone through to reach this day. Using rose quartz, the stone that symbolizes love, Debra and Todd will each make a special wish for our Bride and Groom.”

After the ceremony, several guests told me how much they appreciated seeing the best man and maid of honor have a meaningful role in the ceremony.

As you can see, it would be a simple matter to give stones to the parents and ask them to come forward and make a wish. Or, if children are involved, give each a stone and ask them to make a wish. Depending on how many hearts will be placed in the jar, be sure the jar is big enough!

When I was creating this ritual, I knew the jars themselves had to be special, each one unique, nothing mass-produced. I wanted an heirloom. So I worked with my friend Julia, owner of Venetian Cat Studio – Historical Reproduction Pottery and Fine Art – in New Mexico. Thinking of my couples who fly in and out of Connecticut the same day, I asked Julia to create a small jar that would easily fit in a suitcase. Hoping the couple would place the jar someplace visible, I asked Julia to make the color of the jar fairly neutral. Mindful that all marriages face challenges, I asked her to make it look as though something was spilling from the top. I was also mindful that none of us is perfect, that we can’t expect perfection from others. I asked Julia to veer from her usual standards and allow imperfections. She delivered.

Is it necessary to use a handcrafted jar for this ritual? Of course not. Just be sure you choose something special, a container that symbolizes the love you share and the future you envision.