CHUPPAHS, ARCHANGELS, ASTROLOGY, AND THE FOUR ROYAL STARS OF PERSIA

I’m often asked to create a ceremony for a couple who come from two different spiritual paths or follow no particular path but want spiritual elements to make the ceremony comfortable for their parents. Such was the case in a recent wedding of a Jewish bride and a Catholic groom.

The bride’s family wanted her to be married under a chuppah. While the groom’s family had no objection whatsoever, the mother of the bride was sensitive to their feelings. What follows is an amended version of the language I wrote for their ceremony: 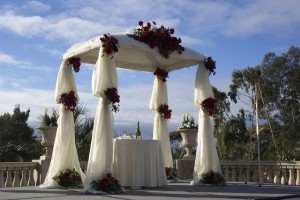 To honor the bride’s heritage, we stand under the chuppah, the wedding or bridal canopy associated with Jewish weddings. We often hear that the chuppah represents the new home the couple will create, with open sides to symbolize the couple’s connection to their community and the hospitality they will extend to their guests. The chuppah has been said to symbolize the temple and the ability to move it if needed. Some say the four poles symbolize family and friends and their support of the marriage. Some say the poles represent the four rivers around the Garden of Eden.

In addition to those earthly meanings, there is also a cosmic meaning to the canopy and four poles that is much older. 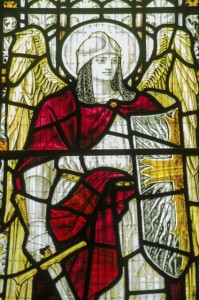 In time, Judaism and Christianity, among other religions, re-imagined those royal guardians and called them by a word familiar to us now: Archangels, the most common being Michael, Raphael, Oriel, and Gabriel.

Though the format varied, many cultures then and now began their celebrations by inviting or somehow symbolizing these four royal stars, spirits, angels, constellations, elements. Even in the Catholic Mass, the priest swings the censor filled with incense in four directions to acknowledge a tradition as old as time.

Whatever the culture, religion, or ritual, by giving attention to the four guardians that held the canopy above the earth, the participants believed that for those beneath the canopy the air would blow fair not foul, fire would burn to warm not destroy, water would quench not drown, and earth would stand stable not shake or slide. All of which makes this canopy a symbol of how all of us share the same sky.

Whatever our religion or spirituality, we want this couple to feel the support, the protection, the friendship, the love of all who gather here today.

Are you planning an interfaith ceremony? Any specific concerns? I don’t guarantee to have the answers but I’m a member of a creative community of celebrants. I can ask them on your behalf.