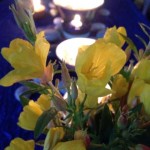 In June of 2015, I led a Summer Solstice ritual at Meg’s, a gift shop and spiritual boutique in Manchester, CT. With my European ancestors in mind, we envisioned people living in ancient times and imagined their anxiety as the sun’s light diminished with each passing day. Would there be enough light to grow food? Or would they starve? Would there be enough heat to say warm? Or would they freeze? Once winter came, would it ever leave? It’s no wonder the ancients held rituals to honor the sun, to plead for its return.

A ritual is a visible act performed with invisible intent. What kind of rituals did the ancients create for the Summer Solstice? They lit bonfires to connect with the powerful sun. They drank from sacred wells to connect with the tender moon. Why both the sun and moon? Because people whose lives were entwined with the land knew that too much fire burns, that too much water drowns.

WaterFire as Ritual
A great example of a contemporary interpretation of how the sun and moon can come together is WaterFire, an award-winning sculpture by Barnaby Evans displayed throughout the summer on three rivers in Providence, RI. Thousands of people line up on the banks to watch. To witness the joining of water and fire is breathtaking. To know its connection to ancient times is humbling. 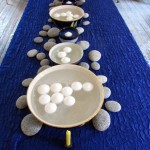 Create Your Own Ritual
Celebrate the Summer Solstice with a WaterFire ritual of your own. Start with a long table, or a series of short tables lined end-to-end. Cover the table with a blue cloth to suggest water. Line up bowls on the table, the largest bowl at one end, the smallest bowl at the other. Fill all the bowls with water. Add floating white candles. Place assorted stones around the bowls to simulate a riverbed. Have Sharpies handy. Light a small candle and have at least one taper to use later when the floating candles are lit. 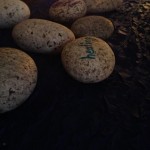 Stones carry messages for the celebration

Invite each person to take a river stone and a Sharpie. Write a word or draw an image on the stone, something that represents an achievement you want to celebrate. The achievement might be solar – an outer, physical accomplishment. It might be lunar – an inner, reflective revelation. 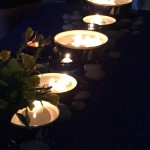 When everyone has completed the stones, turn down the lights. Invite people to come to the table, return their stone to the river bed, and light one of the floating candles. Play music and spend a few moments quietly watching fire float on your magical river. Encourage people to comment on the words they wrote on the stones. Being able to share an accomplishment with others is empowering.

To close the ritual, invite everyone to stand in a circle and hold hands. One by one, moving clockwise, each person says one word to represent a gift for the circle.

Share Your Pictures
If you recreate this ritual, please do so safely. Send me a picture. I’d love to see it! 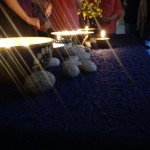 Light rays on water and stones

Zita brings “Happily Ever After” to life. She is a wedding officiant, ordained interfaith minister, a certified Life-Cycle Celebrant®, playwright and multipublished romance novelist. Through Moon River Rituals, Zita creates customized ceremonies for individuals, couples, families, and communities in CT, RI, MA, and NY. She is a proud supporter of marriage equality. To see her handfasting cords, visit www.etsy.com/shop/MoonRiverRituals and www.Facebook.com/MoonRiverRituals. Zita also hosts and produces three television shows: Weddings with Zita, Page 1 and Full Bloom. Watch them on YouTube.com/ZitaTVNetwork. For information about Zita's writing, visit www.ZitaChristian.com, Yes, she wears many hats
View all posts by Zita →
This entry was posted in Cultural Traditions, Life in General, Seasonal and tagged seasonal rituals, Summer Solstice. Bookmark the permalink.