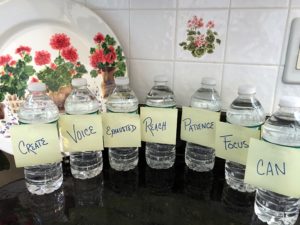 Water bottles labeled with words for the Drink Your Words ritual

“Words are but pictures of our thoughts.” So said England’s first poet laureate, John Dryden, back in the 1600s. His words inspired a simple ritual I created called “Drink Your Words.”  I’ve done this ritual in various forms for several years. It’s a good way to begin each day. It’s especially powerful at the beginning of an important activity, and at the beginning of a new year. In beginning a relationship, this simple ritual can prove both playful and revealing.

A little background first. Every December at the Winter Solstice, I choose three words for the coming year. Every single day in the new year, I give energy to those words. My goal is to absorb their essence, to draw their power into my marrow, so deeply that every bone feels the strength of the words. I don’t choose my words lightly. It takes weeks for me to decide.

This year, 2018, I have an astrological configuration that suggests I will end the year either exhausted or depressed. Exhausted because I gave every ounce of effort to accomplish a big dream, or depressed because I didn’t. I considered using EXHAUSTED as one of my words for 2018 because of its significance for me. I lived with the word for two weeks. What happened? I felt exhausted. Not at all what I wanted! So, I changed that word to ENERGIZED. It’s working just fine.

A ritual is a visible act performed with invisible intent. My inspiration for this ritual began with Hippocrates, the Father of Medicine, who said, “All disease begins in the gut.”  I wondered… Can healing also begin in the gut?

I turned to the late Masaru Emoto. He was the Japanese author and researcher who gained fame for his work on the effect of human consciousness on the molecular structure of water. He demonstrated the difference in the formation of crystals of frozen water. The crystals that came from water that had first been “spoken to” with words of love and kindness were well formed and symmetrical. The crystals formed from water that had been “spoken to” with anger and hate were warped and distorted.

I’ve always talked to my plants and had great results. Why not talk to my water?

Write your word on a piece of paper, label, or Post-In note and tape it to a bottle of water.

Remember that a ritual is a visible act performed with invisible intent. The invisible intent of this ritual is that by drinking the water you will ingest the power of the word you’ve chosen. The physical act is obvious. You drink the water!

As you drink the water, envision the energy of the word and what you want the word to do for you. Think about how you’re quenching your spirit. Close your eyes. Imagine the word as a stream of light illuminating every cell. If you keep a journal, write a few lines about how it feels.

Give yourself time to choose your words. You’ll live with them for a year, or more.

If you’re new to this idea, try this first. Line up seven bottles on your kitchen counter, one for each day of the week. Write a different word on seven pieces of paper and affix one to each bottle. Drink one of the bottles of water each day. How does it feel to drink the energy of each word? How does each word taste to your spirit?

At the end of the week, you’ll have a good idea of the words that feel the most powerful for you at this time in your life.

While I can’t guarantee the success of this ritual, I do know that words have power. For example, bullying is a negative manifestation. No one questions that bullying happens. We hear of its damage all too often. So why not counter the negative power of bullying words with a ritual that empowers positive energy?

Your intent is the key. The words we use to quench our spiritual thirst help us tap into the best part of ourselves and what we have to give to the world. That’s a gift you give to yourself and to everyone who knows you.

Try it. Let me know what words you used and how it felt to imbibe their energy.

I’ll share other ways to use this ritual in an upcoming podcast. My goal is to launch it this month, February 2018.  I’ll keep you posted.

Zita brings “Happily Ever After” to life. She is a wedding officiant, ordained interfaith minister, a certified Life-Cycle Celebrant®, playwright and multipublished romance novelist. Through Moon River Rituals, Zita creates customized ceremonies for individuals, couples, families, and communities in CT, RI, MA, and NY. She is a proud supporter of marriage equality. To see her handfasting cords, visit www.etsy.com/shop/MoonRiverRituals and www.Facebook.com/MoonRiverRituals. Zita also hosts and produces three television shows: Weddings with Zita, Page 1 and Full Bloom. Watch them on YouTube.com/ZitaTVNetwork. For information about Zita's writing, visit www.ZitaChristian.com, Yes, she wears many hats
View all posts by Zita →
This entry was posted in Ceremony Ideas, Life in General, Uncategorized and tagged daily ritual, DIY ritual, drink your words, morning routine, ritual with kids, spiritual not religious. Bookmark the permalink.