Episode 43: EAGLE MEDICINE FOR THE SPIRIT 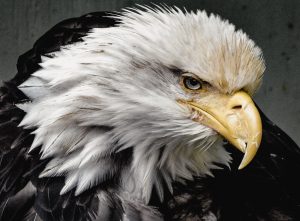 Imagine an eagle. Did you picture a majestic symbol of patriotism? Or, a sacred Native American totem? Or a giant nest perched in the top of a tree or on the edge of a cliff?

Did your mind conjure an image of the huge bird soaring into the sky then diving with laser focus into a river, coming up clutching a salmon in its talons?

Maybe you pictured the two ancient Druids who shape-shifted into eagles and now guard the tomb of King Arthur in the mountains of Snowdonia in Wales.

From the powerful to the sacred, the high-flying to the laser-focused, from the steady to the shape-shifter, the eagle commands respect and creates wonder all over the world.

This article is the first in a series about how birds of prey can inspire rituals for a variety of situations: funerals  and memorials, projects that require focus or the ability to see the big picture, and life events that require courage.

I live in New England. Winter has arrived and the trees are bare. Without leaves, the branches won’t get weighed down with snow, making them less likely to snap. Mother Nature is clever that way.

Birds of prey feed on the flesh of small mammals. In my neighborhood, that means squirrels, rabbits, and rodents. Birds of prey eat other birds, too, making the backyard bird feeder a danger zone. Without the camouflage of leaves in winter, it’s easy for birds of prey to find food. That’s why their young hatch in February.

Since ancient times, people have studied birds, taking notice of their colors, their habits, and habitats. These observations inspired the links between birds and certain magical qualities. Those qualities led tribes, armies, and whole countries to claim certain birds as their symbols. We see it today in sports:  the Philadelphia Eagles, the Atlanta Hawks, the Atlanta Falcons, the Seattle Seahawks.

We see the mythology of birds in origin stories, too. The late Ted Andrews writes in his book, Animal-Speak, that “In the ancient Aztec tradition, the chief god told the people to settle at a place where they find an eagle perched on a cactus eating a snake. This place would become Mexico City.”

What are some of the qualities of birds of prey and how can they inspire rituals? 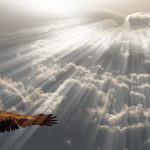 Because of their connection to death and the Afterlife, birds of prey are useful symbols for funerals. As a Life-Cycle Celebrant, I officiate funerals and memorial services. Funeral homes often use images of eagles on commemorative bookmarks and memorial cards.

Popular readings for funerals speak of the eagle’s ability to fly to the heavens. There’s a Native American belief that when the eagle spirals upward, it pierces a small a hole in the sky. The Afterlife, what some call Heaven, is said to be on the other side.

Call on eagle medicine when you need to see an issue from a higher perspective. 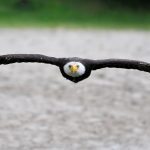 There are more than fifty species of eagle. The two found in North America are the bald eagle and the golden eagle. With a wing-span of from six to eight feet, the eagle is one of the world’s largest birds.

In her book, The Healing Wisdom of Birds, author Lesley Morrison talks about the eagle’s ability to fly extremely high and soar on air currents, thereby preserving its energy. Morrison invites us to think about how to reach for success without getting exhausted.

Statistics show that more than 804,000 small businesses started in 2020. I’m sure many of those entrepreneurs are exhausted.

Working with eagle medicine is working smarter, not harder.

If you watch nature shows, you’ve seen images of an eagle’s nest, always built in a high place, at the top of a strong, healthy tree or on the edge of a cliff. The location provides a place to rest undisturbed and protect its young.

Eagles have been known to use the same nest for over thirty years, expanding it a little each year. To the Finnish-Ugrian people of Siberia, once an eagle built its nest in the same tree for several years, the tree itself was considered sacred.

Morrison cautions those who are aligned with eagle medicine that building a nest so far above others can make them aloof and idealistic.

If you have children heading off to college, give them a picture of an eagle and encourage them to reach for their dreams. At the same time, caution them to stay engaged with their world.

Be aware of the challenges eagle medicine can bring.

First, a word of caution. Don’t go looking for eagle feathers. Both the bald eagle and the golden eagle are covered by the federal Protection Act of 1940. Because eagles are sacred to Native Americans, they are the only people who can legally possess eagle feathers. For anyone else, possessing an eagle feather is a federal crime, subject to a fine of up to $100,000 and a year in jail.

Instead, go to the  Sierra Club’s website.  For a donation of $39, you get a plush toy eagle and, more importantly, you symbolically adopt a wild, bald eagle.

Use the toy in a morning ritual. Simply hold the eagle and say, “Help me gain perspective on my vision. Show me what I really need to see.”

Ted Andrews notes that some Native Americans treasure the white feathers of the bald eagle because “they are links to Grandmother Medicine — tremendous wisdom, healing, and creation.”

So, to all my fellow grandmothers, get a plush eagle toy from the Sierra Club. Give it to your grandchild along with a story about how both of you are helping real eagles to survive.

Be willing to see what the eagle tries to show you. 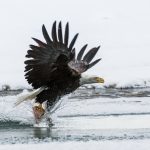 Physical eyesight is affected by eagle medicine, too. In the book Bird Signs: Guidance & Wisdom from Our Feathered Fiends, author G. G. Carbone reports that an eagle’s eyesight is so keen it can spot a fish in a river from two miles away. If you’re drawn to eagle medicine, be sure you take good care of your eyes.

There are stories about how the eagle is so powerful it can fly directly into the face of the sun without flinching. Ted Andrews says people used to believe that when an eagle was old, its eyesight would grow dim and that’s when it would fly into the face of the sun and not get scorched. Then the eagle would dip into clear water three times and its youth would be restored. That aspect of eagle medicine makes it useful for those seeking to heal their inner child.

In Siberia, people believe that the eagle is the first shaman sent by the gods to help heal the people. Leslie Morrison talks more about this in her book. As I write this article, the death count in this country from Covid-19 is over 340,000. The doctors and nurses on the front line witness trauma and tragedy on a daily basis. I think about how the eagle likes to avoid any kind of disturbance with humans. But medical personnel can’t avoid the life-and-death pressure in ERs and ICUs. What they do requires enormous courage — a hallmark quality of the eagle.

When I see news reports about these doctors and nurses — and the EMTs, the ambulance drives, the lab and x-ray techs, the pharmacists, the chaplains and others — I say a little prayer that when they do get to return to their own nests, that they get to rest in a place that’s quiet and safe,  much like an eagle’s nest.

If you want to show your appreciation to someone whose courage has helped you or a loved one, give that person an eagle plush toy, or a picture of an eagle. Add a simple note that says:  In you, I see the eagle’s qualities of focus and courage. Thank you for helping me and my family.

Recognize the courage of eagles in all those fighting the pandemic. Recognize it in the mirror.

At the beginning of this episode I mentioned the two eagles that guard the grave of King Arthur. In The Druid Animal Oracle: Working with Sacred Animals of the Druid Tradition, authors Philip and Stephanie Carr-Gomm say that King Arthur is buried in a secret grave in the mountains of Snowdonia in Wales.

“No one will ever be able to violate it, because it is guarded by two great eagles. These eagles are in reality two Druids who as shape-shifters have transformed themselves into eagles on constant patrol in the mountain wilderness.”

The Carr-Gomms add that according to an Irish tradition, Adam and Eve still exist today, as eagles living in Galway, at Killery Bay.

The idea of shapeshifting into an eagle isn’t limited to the Celts. The great Odin of Norse mythology could turn himself into an eagle.

In the Native American tradition, the Navajo shape-shift (“skin-walking”) into eagles and other powerful animals in order to heal or protect their people.

In her book, Animal Magic, author D.J. Conway says that emperors in ancient Rome would put the symbol of an eagle on their legion standard as a symbol of bravery. When an emperor died, an eagle was released at his funeral. The action might have been solely one of tribute. Or, perhaps the eagle was freed so it could embody the emperor’s spirit.

For the living, Lesley Morrison writes that connecting with eagle medicine requires great patience and effort. She says that the heart of eagle medicine is “reaching the place where we realize our own freedom to soar.”

As I write this, 2021 is a newborn. In celebrating all that’s fresh and full of possibility, we look back to where we were and set goals for where we want to go.  We need to see our personal “big picture.”  Working with eagle medicine, that means seeing ourselves as both physical people and as spiritual beings.

Zita brings “Happily Ever After” to life. She is a wedding officiant, ordained interfaith minister, a certified Life-Cycle Celebrant®, playwright and multipublished romance novelist. Through Moon River Rituals, Zita creates customized ceremonies for individuals, couples, families, and communities in CT, RI, MA, and NY. She is a proud supporter of marriage equality. To see her handfasting cords, visit www.etsy.com/shop/MoonRiverRituals and www.Facebook.com/MoonRiverRituals. Zita also hosts and produces three television shows: Weddings with Zita, Page 1 and Full Bloom. Watch them on YouTube.com/ZitaTVNetwork. For information about Zita's writing, visit www.ZitaChristian.com, Yes, she wears many hats
View all posts by Zita →
This entry was posted in Animal Totems, Cultural Traditions, Funerals, Life in General, Nature Based, Ritual Recipes Podcast, Uncategorized and tagged animaltotem, birdsofprey, eagle, eaglemedicine. Bookmark the permalink.