What does a wedding arch have to do with a king’s scepter, a flag planted on the moon, and a Thomas Kincaid painting? Weddings are filled with symbolism. One that has been lost over the years is the original meaning of the ceremony arch.

Show a photo of a beach, or a meadow, or a mountaintop. You have a beautiful shot of nature. Add chairs and you know that people are expected. Maybe there’s going to be a class on outdoor photography, or a lecture on climate change, or a sales pitch for real estate development. Add an arch and everyone knows what’s coming — a wedding!

Now and then, florists and designers use creative license to alter the traditional curved arch into something more rectangular, even circular. However the structure is shaped, it still defines the ceremony space. It still provides a frame for wedding photos, especially for that magical first kiss. But there’s another reason, an ancient reason, an astronomical reason for the arch.

Centuries ago, people observed the sky to understand the world they lived in. The practice was expressed in the belief, “As above, so below.” The professional observers were mathematicians who measured and calculated the activity in the sky and determined what the activity meant. Today, we would call those mathematicians astronomers or astrologers.

It wasn’t until the late 1600s when science reasoned that the earth revolves around the sun, not the other way around as had been understood, that studies of outer measures, referred to as astronomy, and inner meanings , referred to as astrology, became at odds with each other. In time, astronomy was seen as scientific, and therefore, worthy. Astrology was seen as unscientific, and therefore, to be discarded, then shamed, then forbidden.

Long before the 1600s, all these professional sky observers noticed that while most stars appeared to move over the course of a night and sometimes over a season, they all circled around one star, the one we know as Polaris, the North Star. It never moved. Its position was steadfast and true. At the time, the observers drew two conclusions: 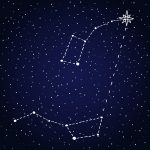 Based on that understanding, whoever on earth held that pole had dominion over the sky. In a world ruled by kings, that celestial pole was symbolized in the creation of the king’s scepter. Some scepters even had orbs on the top.

On July 20, 1969, when astronauts Neil Armstrong and Buzz Aldrin landed on the moon, they planted the American flag. Back here on Earth, the concept of planting a flag is seen as a statement of arrival, or dedication, or victory, or domination, or ownership, or control of the land on which the flag is planted. The flag planter acts on behalf of the country’s ruler and the flag represents the ruler’s scepter.

Centuries ago, the average person did not have a scepter or a flag. Such items were the province of kings, other royals, and armies. If you’re familiar with the traditional  Rider-Waite-Smith tarot deck, you know the empress and the emperor have scepters. So does the hierophant, the heroic driver of the chariot, and most of the kings and queens in the minor arcana. The Word card has two scepters. The ordinary people in the cards don’t have scepters.

In time, towns got their own flags, with a pole erected in the center of the town. Many people were already accustomed to erecting a May pole in the spring to invite the physical union of the god and goddess. Their union brought fertility to the land. A May Pole was temporary since it was always cut up and disbursed for Yule logs. A town with a permanent flag pole had reason to feel proud. The town and its citizens were directly connected to the sky and its divinities.

That pole was also a powerful phallic symbol. The land, seen as the body of the goddess, could not grow food without being fertilized by a king whose power was aligned with that of the god in the sky, the source of sun and rain. Proof that the king had a personal connection to the sky god would be seen in the crops. A good, strong stalk of corn or staff of grain was said to mirror the king’s… stalk….or staff.

Over time, people gained a better understanding of the relationship between the Earth and the sky. On one hand, we know that the Earth’s axis does operate like an invisible pole keeping the planet in orbit. On the other hand, we know that no one person can hold a sceptre and control the sky.

What does all this have to do with weddings?

I’ll get there in a moment. First, I believe in giving credit where credit is due. Many of the stories I’ve learned about the sky came from mythic astrologer Wendy Ashley. I had the privilege of studying one-on-one with Wendy years ago, long before my wedding work.The first time I stood under an arch as an officiant, I remembered what Wendy taught me about the beliefs around the North Star and the imaginary pole. I got chills. 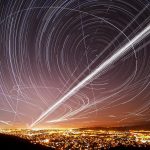 In that moment, I also remembered something I had learned in high school. Back then, I took three years of Latin. Alas, I’ve forgotten most of what I learned. But I do remember that the word “sacrifice” comes from “sacer” meaning “to set apart from the ordinary,” “to make sacred.”

Despite the mind-boggling advances the world has made in technology, ancestral knowledge–like sky stories–is embedded deep in our bones. We resonate with symbols buried in our psyche.

As I said at the beginning, weddings are filled with symbolism. Picture an officiant standing under the ceremony arch. Acting in an official capacity, she or he opens the connection between the earth below, realm of the real, to the sky above, realm of the possible.

The space where the magic will occur has been set apart from the rest of the area. The couple enters. They’ve severed certain connections to their families of origin to commit themselves to each other. Their sacrifice makes the space sacred.

Later, when the officiant makes the pronouncement that the couple is legally married, we see these two people standing under the arch that represents their piece of the sky and we know, we know that they are, in that very moment, solidifying their connection. They are in the act of creating their own kingdom. 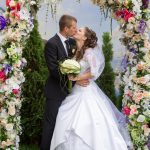 The couple leaves the ceremony space and we shower them with rice, or bird seed, or flower petals, or bubbles, or the sound of bells. We don’t throw these gifts at their feet. We toss them in the air as though they are falling from the top of their new “king-dome.”

And that brings me to the arches we often see in home gardens and gateways, and in paintings like those by Thomas Kincaid. Whatever your feelings are about Kincaid’s style, he has definitely tapped into the human longing for family, comfort, security, and the sense of belonging that comes from living in a house that has stood for generations. That’s what many of us feel when we see his cozy cottages, a welcoming home where at least one light burns, perhaps because a loved one is still on the road and someone in that house knows it, and that someone cares.

Real estate ads claim an arch at the entrance to a front yard gives a house curb appeal. That’s because the arch marks the boundary between the hustle and bustle of the outside world and the sanctuary of home, a personal castle. 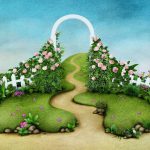 At the entrance of a garden, an arch denotes the threshold between the mundane and the magical. Just ask any gardener!

Earlier, I said that a flagpole represents a royal scepter and a flag itself identifies the royal in some way.  Put that idea in contemporary times. Notice how many homes and gardens have decorative flags. The big flags of old have become small banners that can be stuck in the ground or hung on a front door or a garden post. Even a little flag still says something about the identity of the person who planted it:  “Welcome” or “Happy Spring” or “Go Red Sox.”

My daughter has a little flag in her front yard. It contains lyrics to the Louis Armstrong song, What a Wonderful World. That little flag is her way of reminding anyone who stops to read it that there is goodness in the world. Her flag is planted next to a decorative light pole covered with climbing flowers. That pole is the scepter that claims this plot of land as her castle.

Not all officiants appreciate a ceremony arch the way I do. It can block the view for some of the guests. It can interfere with the bride’s gown and her ability to move. It can snag her veil. Decorated with flowers, it can wilt or be drenched in a sudden cloudburst. It can attract bees. I speak from experience.

Do I still think having a ceremony arch is worth the effort. I do. An arch is not merely a decoration or a prop for photos. A wedding arch is a reminder from ancient times that we have dominion over our lives when we are like the North Star: Steadfast. Faithful. True.