Episode 57: Enchanting Your Tools and Talents 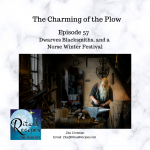 Are you an artisan, a craftsperson, a maker? It’s February.  If you lived in the Old World, in northern Europe, especially in the land of the Norse, you’d be getting ready for a very special festival: “The Charming of the Plow.” In today’s world, that means it’s time to sharpen your grinders and garden tools, your chisels, saws, and scissors, time to sort your fabric and yarn, paints, pens, brushes, and beads. It’s time to affirm your faith in your talent and get to work on the BIG dream.

The days have been growing longer ever since December’s Winter Solstice. Two more minutes of light a day might not seem like much, but we’ve already picked up an hour. In no time at all, Spring will be here. If you lived in Northern Europe around the year 900 or before, you’d be out there in the field, trying in vain to break the heavy, clay soil with a wooden plow. You’d consider yourself lucky. The wooden plow was better than a stick.

About 100 years later, the year 1000 or thereabouts, you could have a plow made of iron. That would be a heavy plow. And it would be a game-changer. Compared to the generation before you, you could cultivate that moist, fatty, very fertile soil of Northern Europe and, at the same time, cut deep enough to bury weeds, which would save you a lot of time in caring for your field.  You could plant more crops, feed more people, amass, often for the first time, real wealth.

You might need a team of eight horses or oxen to pull that heavy plow. Chances were good that you didn’t have that much horse power. Few farmers did. So you and your neighbors would pool your resources. You’d share.

You’d all do something else, too. You’d thank the Dwarves. Think of the seven you met in Disney’s movie about Snow White. Now think about them in a serious way.

In Norse mythology, Dwarves are a race of magical creatures who live inside mountains and under the ground in a labyrinth of mines and forges. They’re said to have been created from the rotting flesh of a giant.

Dwarves are said to be wise, creative, and strong. Four of them are so strong it is said they hold up the four corners of the sky. There’s Austri in the East, Sudri in the South, Vestri in the West, and Nordi in the North.

Dwarves are also highly skilled. They know all about the gems and metals buried deep in the earth. They know about the great forge in the center of the earth. In fact, no one is more skilled at the forge than a dwarf. Dwarves are known to be kind to people who respect their skill….. and vengeful to those who don’t.

Now, I have never been to the Scandinavian countries, at least not in this lifetime. So I’m imagining, and I invite you to imagine with me. It’s February. It’s cold. Patches of snow dot the ground. Icicles hang from the roof of your cottage. You and other members of your family bundle up. Working together, you haul your iron plow outside.

You remind your children that their survival depends on the ability to plant a field and harvest a crop. You don’t have a chance without that big plow.

So you purify the plow. You clean it with precious soap. Then you anoint your plow with herbs. You’d probably use thyme. It’s hardy and comes back every year. Thyme is known for its ability to protect. In the old world, women would wash the floor with water and oil of thyme.

Of course, The Charming of the Plow is a big deal. You want to anoint your plow with several herbs, not just thyme. I see you sprinkling dried parsley on your plow. It’s another hardy herb that grows in that climate. Like thyme, parsley is an herb of protection. It’s also an herb used to encourage sexual attraction. How? Chewing parsley aids digestion and freshens the breath. I think that’s why nice restaurants often add a sprig of parsley to the dinner plates before they’re served.

Little red lingonberries would be a good choice, too. They’re known as a superfruit for good health. You want your plow to be healthy. You want it to have a long life, too, so you add needles from an evergreen, probably a spruce.

As you make each offering, you talk about what a fine, fine plow it is. You praise the skill of the Dwarves who fashioned this fine plow.

You fortify yourself with a bracing beverage. You harness your own horses and several that belong to your neighbors. They’ll benefit from your horses in another few days. In the way a loyal football crowd cheers when their team takes the field, you and your family and friends cheer as you direct the horses to pull the plow. The horses strain and the plow inches forward. You hold your breath until the blade penetrates the ground. The earth yields. You cheer! Everyone cheers!

The goal is not to plow a whole field, just dig one ceremonial furrow. As more and more ground turns over, the festive energy grows. Yet, everyone knows that despite the jubilance, this is no game. Your survival depends on it.

Though I’ve never dug frozen earth – with or without a plow – I’m guessing it would take hours. Finally, a furrow of fresh earth stretches before you.

In the belief that the Dwarves can influence your plow from underground, you show hospitality. You and your family and friends now fill the furrow with cakes and loaves of bread. As you thank the Dwarves, you also speak to the Norse Goddess Freyja in her aspect as Mother Earth. You ask her, and your female ancestors, and the female house spirits that live with you, to accept your offerings and to empower, or “charm,”  your plow so that you’ll be able to grow the food your family needs to survive. In magic, it’s never a good idea to rush your offerings. I imagine that charming the plow, digging the furrow, and making all these offerings took the better part of a day, maybe into the night.

Those of us who follow an Earth-based spiritual path, immediately recognize the erotic aspect of charming the plow. In celebration of the coming spring, the Earth is willing to be penetrated by the plow. The red berries symbolize the goddess and the magic of all women who regularly bleed but don’t die. The offerings of cakes and bread is not only a hospitable act. These baked goods come from grain. They symbolize seeds and all that the farmer and his family hope to grow. Though I have no evidence to support this, I suspect there were a lot of babies born nine months after this festival.

In today’s world, if you want to align with the energy of that ritual, ask yourself these questions:

I answered those questions for myself in episode 57 of my podcast Ritual Recipes. I also shared a ritual to help you align with the energy of season. Check it out.

In the meantime, whether you consider yourself a creative person or not, these are good questions to explore any time of the year.