Fire and Water, Sun and Moon, Achievement and the Need for Rest – Episode 19 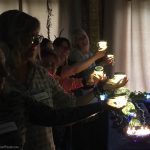 This year’s Summer Solstice has come and gone. But our entry into the dark half of the year has just begun.

My European ancestors divided the year into two seasons, summer and winter. The Summer Solstice was known as Midsummer. People felt joy that the Sun had warmed the earth so they could plant and now their crops were growing. If all went well, the harvest season would be bountiful.

At the same time, they felt anxiety. From now on, each day would be shorter than the one before. Would there still be enough light to grow food? Or would they starve? Would there be enough heat to say warm? Or would they freeze? Once winter took hold of the land, would it ever leave? It’s no wonder the ancients held celebrations to honor the sun, and to plead for its return.

This year, as I’ve done for more than ten years, I led a Solstice ritual at Meg’s Inspirations, a gift shop and spiritual boutique in Manchester, Connecticut. This year, I explored the energy of the Cancer-Capricorn polarity.

Just before it enters Cancer, the Sun spends a month in Gemini, the sign ruled by fleet-footed Mercury, the messenger of the gods. In Gemini, things and people and thoughts move fast. Communication is filled with fresh ideas and flashes of insight. Gemini energy is masculine, outward, yang.  Communication is, metaphorically speaking, by telegraph.

When the Sun finally moves through Gemini and reaches the Summer Solstice, it’s got to be tired! Fortunately, that’s when the Sun enters the watery sign of Cancer, the mothering, nurturing sign ruled by the Moon. Things and people and thoughts move slowly. Along the way, everyone is cleansed, fed, tucked in, forgiven. Cancer energy is feminine, inward, yin. Communication is, metaphorically speaking, by calligraphy. 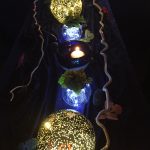 I picture the Moon filling a soaking tub and saying to the Sun:  “Come. Slip into the water. You’ve done a great job these last six months. You need to relax. Your vibration is slowing down…and that’s a good thing. We don’t want to leave us too fast. So, come. My water won’t extinguish your fire. My water is magical.”

That connection might not seem strange when you remember that symbols have always been used to tell stories. Centuries ago, when most people were illiterate, symbols and oral traditions were the sinew that bound the members of a community together. To connect with the Sun, to invoke its power, people would light bonfires and know that they, too, were powerful. To be nurtured by the Moon, to feel her cool, watery embrace embrace, they would drink from sacred wells.

Why honor both the Sun and Moon at the Solstice? Because if your survival depended on the land, you knew that too much sun meant your crops would burn. Too much rain, your crops would drown. You sought cooperation with nature, harmony with the universe.

One of the most beautiful rituals that conveys the idea of the Sun’s journey  is the physically moving work of art called WaterFire in Providence, Rhode Island.  On certain evenings throughout the summer and into the fall, at least 80 braziers set in the waters of three rivers are set aflame. The individual bonfires create what the organizers describe as “a shimmering ribbon” that dances on the water until past midnight.

I checked the calendar for this year’s WaterFire. From the first full lighting on June 22 to the final lighting on November 2, sunsets occur from 8:24 pm to 5:39 pm. In the old days, a person wouldn’t need a computer to affirm that the days were getting shorter. If your life depended on growing your own food, you knew.

Create Your Own River of Water and Fire 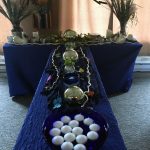 Setting up fabric, bowls, water, and candles for the Solstice ritual

How do we bring that energy into our lives today?  Through ritual. For this year’s Summer Solstice ritual, I placed two long banquet tables end-to-end and covered them with cobalt blue cloth to suggest water. I lined up blue bowls, the largest at one end, the smallest bowl at the other, and filled each one with water. (A side note: If you recreate this ritual, make sure you don’t get the wicks wet when you set the candles in the water.)

I placed black stones around the bowls to suggest a riverbed. Off to the side, I had a basket of silver Sharpies so people could write on the stones later in the ritual.

The floating candles would be lit later in the ritual, too. From past experience, I know that not everyone is comfortable using a hand-held propane wand. That’s why I also have a tea light on a bed of sand in a safe container, along with a taper we can use to transfer the flame from the tea light to the candles in the ritual.

Water and Fire – Moon and Sun

With the symbolic river ready and waiting for us, I invited everyone to think about the relationship between the Sun and the Moon. While none of us were farmers, we could see our own pattern of working hard during the day, relaxing in the evening, sleeping through the night.

I should note here that many of the people who join me at Meg’s have been coming to my rituals for over ten years. When you commit to a practice of ritual, you eventually feel the power of the magic inside you. Little by little, you embrace that power. That’s when you realize that all your actions, even the smallest – especially the smallest – all serve to create the mosaic that is your life.

To deepen our meditation on the Sun and the transformation taking place inside each of us, I created a butterfly ritual. Next to the riverbank, I set up a big piece of white poster board. My grandson, Logan, had painted it with tree branches, leaves and flowers. I had drawn and colored butterflies and copied them onto sticky paper, and cut them out by hand. I gave each person 2 butterflies, one to be used in the ritual and one to take home.

For the ritual, we each wrote a message on the butterfly. Some wrote words that acknowledged the Sun’s gifts. Some wrote words to motivate the Sun to get through the next six months, knowing that along the way he would weaken and die, knowing he would be reborn. Of course, because this was a ritual – a visible act with invisible intent – we knew the messages were for us, too. 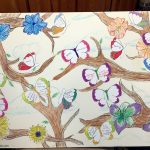 Motivation messages from butterflies to the Sun

We peeled off the back of each butterfly and stuck it on the poster board. Here are a few of the messages:

When we had all written something on our stones, we turned down the lights. One by one, each of us walked up to the river. Counting me, there were 20 of us, all women. There were 20 candles in the water-filled bowls. Each of us held a small, clear plastic jar. Inside was a battery-operated string of fairy lights. They looked like fireflies!

While the voice of Diva Primal singing softly in the background, each woman returned her stone to the riverbed and, using the taper and the tea light, lit one of the floating candles, starting at the far end of the river. The women remained at the river, lining both sides of the banks.

I didn’t want to rush this step, so it took almost ten minutes for every woman to light her candle. As we watched our own “shimmering ribbon” take shape, we listened to music and quietly contemplated our accomplishments, our transformation, and the fire floating on our magical river.

One of the most nourishing parts of my rituals is what I call “sharing.” We talked about the words we’d written on our stones. Remember, these words were about our accomplishments. Yes, for some of us that was uncomfortable. Yes, it was also empowering!

Before we closed the ritual, I asked everyone to spend the next few weeks contemplating one critical question as we, like the Sun, enter the dark half of the year: How will I rest?  I invite you to ponder the question, too.

After we closed the circle, I kept the candles burning for a while so each woman would have some “gentle” time to retrieve her stone from the riverbank.

Before I close, I want to give a heart-felt shout-out to Valerie from British Columbia. She contacted me for help in creating a memorial ritual for a beautiful Macaw that had been a member of the family for many years. I’m already making notes for a podcast episode on the death of a pet.

Another shout-out to Virginia from Australia. She’s a wedding celebrant who contacted me on LinkedIn to say how much she appreciated the rituals I share on the podcast. I can’t say “thank you” to them, and to you to, enough.

Zita brings “Happily Ever After” to life. She is a wedding officiant, ordained interfaith minister, a certified Life-Cycle Celebrant®, playwright and multipublished romance novelist. Through Moon River Rituals, Zita creates customized ceremonies for individuals, couples, families, and communities in CT, RI, MA, and NY. She is a proud supporter of marriage equality. To see her handfasting cords, visit www.etsy.com/shop/MoonRiverRituals and www.Facebook.com/MoonRiverRituals. Zita also hosts and produces three television shows: Weddings with Zita, Page 1 and Full Bloom. Watch them on YouTube.com/ZitaTVNetwork. For information about Zita's writing, visit www.ZitaChristian.com, Yes, she wears many hats
View all posts by Zita →
This entry was posted in Cultural Traditions, Harvest season, Life in General, Nature Based, Ritual Recipes Podcast, Seasonal and tagged seasonal ritual, Summer Solstice, waterfire. Bookmark the permalink.