Gifts from the Ancestors: A Ritual for Samhain

This ritual was initially designed to be performed with a group. At the end of the ritual, I suggest ways it can be adapted as a virtual ritual.

Each person who plans to attend is told in advance to bring a photo of a deceased loved one and a stone the person considers special.

If no photo is available, write the name of the loved one on a piece of paper.

If the name of the ancestor isn’t known, write the qualities the ancestor might have possessed. It is not necessary to know your family tree. This ritual is to connect you with the spirit of your ancestors. What you don’t know, you can imagine.

Before people arrive, have ready:

Bury the stones in the bowl of rose petals. I buy sweetheart roses from the grocery store many times throughout the year. When the blooms are spent, I dry the petals, add a few drops of rose essential oil, and keep them in a jar.

The ancient Celts divided the seasons into summer and winter. Winter begins with the festival of Samhain, literally translated to mean “the death of summer.”  Handed down over the centuries, Samhain is celebrated by what we know as Halloween. For the sake of convenience, we celebrate on October 31. Astrologically, the death of summer occurs when the sun reaches the 15th degree of the sign Scorpio. This year, 2020, that happens on November 7.

Why was this festival so important? Years ago, in many cultures, people viewed the land as the home of the ancestors. The spirits of loved ones who had died were thought to guide and protect those still walking the earth.  An object that came from the land, particularly a stone, was believed to bridge the worlds of now and beyond. It was a time when physical survival depended on spiritual connection. To swear an oath with your hand on the sacred object meant you would do as you promised, or risk the connection to your ancestors.

People held festivals for the dead long before Christianity. The Day of the Dead celebrations can be traced back to the various indigenous groups, including the Aztecs and other pre-Hispanic civilizations, from as far back as 3000 years ago.

A person’s spirit was thought to reside in the head. Skulls were collected and used during rituals to symbolize death and rebirth.

The Christian celebration of All Souls’ Day was first instituted in the year 993 CE at a monastery in the town of Cluny in France.  The celebration spread quickly throughout the Christian world.

Today, we think of the gifts we received from our ancestors – everything from our physical appearance to the spirit of determination, or the ability to survive, or a talent for music, or an affinity with animals. The possibilities are endless.

Tonight, we’re going to honor our own ancestors and the gifts they’ve given us.  We’re going to create an oathing stone to remind us of our powerful connection to the past.

The Ancestor Altar & Inherited Gift:  Each person places a photo of a deceased loved one on the altar and sets her own stone next to the photo. One at a time, each person talks about the ancestor and answers the question:  What gift do you believe you were given from this ancestor?

The New Ancestral Gift:  One at a time, each person goes to the bowl of rose petals, reaches in and pulls out a stone. The word on the stone is a gift from the ancestor.

The Oathing Stone:  I believe that making an oath is a sacred act. Because of that, I don’t suggest people make oaths as part of the ritual. Instead, each person retrieves her own stone from the ancestral altar. She holds her own stone in her left hand and the word stone in her right hand.

Play meditative music. Give people time to contemplate what it now means for the special stone to be imbued with the word stone from her ancestor.

When ready, place both stones in the left hand.

Allow time for people to share their feelings about the power imbued in their special stone. Remind them that their own stone is now connected to a gift from their ancestor, making their own stone an excellent choice to be used as an oathing stone.

Oathing stones can be used in wedding ceremonies as the couple makes their vows. Couples can use the stone again when they celebrate their anniversary.

An oathing stone can be used by an individual when making a promise to herself.

An oathing stone can be part of a death-bed ritual, too.

An oathing stone can be used as the focus of meditation.

MAKE IT A VIRTUAL RITUAL

Each person comes to the call with 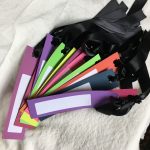 The organizer has a bowl filled with single words written on paper and folded so the words aren’t visible. Or, type the words on cardstock tied with ribbon.

Once each person acknowledges the inherited ancestral gift, she ties the black ribbon around her wrist.  Then the organizer draws a word — the new ancestral gift — for each participant and reads it out loud.

As in the original version of this ritual, dedicating each person’s special stone as an oathing stone is a serious process, not one to try to accomplish during a group ritual, in person or online. Instead, encourage participants to share their insights about the new gift received in the ritual.

If the organizer prepared the new ancestral gifts on cardstock with ribbons, mail each ribbon to the participant. Yes, old-fashioned mail.

How will you honor your ancestors?

What gifts have they given you?

How will you use your gifts to make the world a better place?

Zita brings “Happily Ever After” to life. She is a wedding officiant, ordained interfaith minister, a certified Life-Cycle Celebrant®, playwright and multipublished romance novelist. Through Moon River Rituals, Zita creates customized ceremonies for individuals, couples, families, and communities in CT, RI, MA, and NY. She is a proud supporter of marriage equality. To see her handfasting cords, visit www.etsy.com/shop/MoonRiverRituals and www.Facebook.com/MoonRiverRituals. Zita also hosts and produces three television shows: Weddings with Zita, Page 1 and Full Bloom. Watch them on YouTube.com/ZitaTVNetwork. For information about Zita's writing, visit www.ZitaChristian.com, Yes, she wears many hats
View all posts by Zita →
This entry was posted in Celtic, Ceremony Ideas, Cultural Traditions, Harvest season, Nature Based, Rituals, Seasonal and tagged ancestors, day of the dead, halloween, oathing stone, ritual, samhain, virtual ritual. Bookmark the permalink.