HARVEST SEASON: Debt and the Power of Prosperity

In the “Old World” of my Celtic ancestors, August marked the beginning of the harvest season. Country fairs called people from the fields where they grew crops and from the open lands where they grazed herds. August heralded a time to acknowledge hard work and enjoy its rewards.

In Ireland, Lammas was the first and most popular of the harvest fairs. Young men, muscled from months of work in the fields, competed with each other by chopping logs, lifting stones, shooting arrows, and tossing bales of hay, all in an effort to impress young women. Some local authorities prohibited such physical displays. They feared the unruly youth and their visible show of strength. What if the balance of power shifted?

August was also the time when those who owned land paid their taxes and others paid rent. In some parts of Ireland, those who owed money anxiously eyed the debtors’ prison, praying to see a white glove. Should the aristocratic symbol be on view, the peasants would enjoy a grace period. They needn’t fear arrest for lack of funds to pay their debts. At least not in August.

Earlier this month, I led a Lammas ritual at “Meg’s,” a spiritual boutique in Manchester, Connecticut. As part of the ritual, I asked the participants to imagine they were approaching a harvest fair in Old England. “You’re riding in a horse-drawn hay wagon, atop a mound of freshly mown gold. You see tents, games, and all manner of farm animals. You hear laughter that’s flirtatious, laughter that’s loud, laughter that’s bawdy. You hear songs – sweet songs, fighting songs, drinking songs. You smell apples – baked in pies and pressed as cider. You smell all manner of roasted meats, stews, and freshly baked breads.”

The participants continued on the journey. “Imagine that you’re a farmer and that your harvest has yielded a bumper crop, far exceeding your expectations. The currency from the harvest has given you power.”

We passed out the paper coins. I asked everyone to think of their world today. Imagine receiving a windfall of prosperity and power. On the paper coin, answer two questions:

Some people chose to share their answers. Others chose silence. One by one, we shredded our paper coins. In exchange, we honored our reflection with gold coins of chocolate. The specifics of that part of the ritual will remain private. What I can say is that, for many of us, the debt we carry, either because we owe it or because it is owed to us, is not financial. 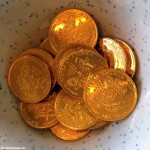 Debts were to be paid at the first harvest fair.

These two questions are generating a lot of discussion in my circle of friends. Please share your thoughts, here or on my Facebook page.

Zita brings “Happily Ever After” to life. She is a wedding officiant, ordained interfaith minister, a certified Life-Cycle Celebrant®, playwright and multipublished romance novelist. Through Moon River Rituals, Zita creates customized ceremonies for individuals, couples, families, and communities in CT, RI, MA, and NY. She is a proud supporter of marriage equality. To see her handfasting cords, visit www.etsy.com/shop/MoonRiverRituals and www.Facebook.com/MoonRiverRituals. Zita also hosts and produces three television shows: Weddings with Zita, Page 1 and Full Bloom. Watch them on YouTube.com/ZitaTVNetwork. For information about Zita's writing, visit www.ZitaChristian.com, Yes, she wears many hats
View all posts by Zita →
This entry was posted in Cultural Traditions, Life in General, Seasonal. Bookmark the permalink.