Blacksmiths, brewers, and bards. What a strange group, you might say. What could they possibly have in common? All three are favored by the Celtic Goddess Brigid. Why? Because they all create with her elements of fire and water. 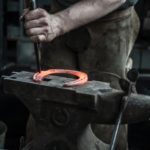 Blacksmith at forge – Photo by Jonathan Bean for Unsplash

The fire in a blacksmith’s forge is hot enough to melt metal. From that heat, whatever is being created, whether horseshoe, tool, or sword, is plunged into cold water.

A brewer boils malt or other starchy ingredients to create wort, then plunges it into an ice bath. Centuries ago, beer was often safer to drink than water. Hops, a major ingredient in beer, has been used in herbal medicines for centuries to treat insomnia, depression, heart problems, some cancers, and a host of other ailments.

The bard’s fire is that of inspiration; his words drawn from the watery realm of emotion. It was the bard, the fierce poet, whose passionate speech could fire up a crowd. To an illiterate population who learned of the world by listening, a conquered population under the rule of another, the words of a skilled bard could instigate rebellion. Words could entertain when life looked bleak…and words could soothe the spirits of those in pain.

In all three cases, something, whether metal, or grain, or an idea, is transformed from one thing to another with fire and water. Brigid’s association with water also comes from her healing wells that never froze, filled with water believed to cure all manner of ailment.

Whether blacksmith, brewer, or bard, all three honored the Goddess Brigid on the fire festival known as Imbolc. There are many tales in the legend of Brigid, more than I can share with you now. Just know that she is also the patron Goddess of women in childbirth and of mothers whose sons died by violence. 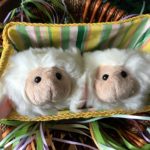 Stuffed toy lambs in a basket

The word Imbolc is thought by some to mean “in the milk” a reflection of all the sheep that would be pregnant that time of year. Others connect the word Imbolc to the words “I wash” as a form of ritual purification.

Whatever the etymology, Imbolc marks one of the four Celtic fire festivals, and is celebrated on February 1, though some evidence suggests February 13. For practical purposes, I consider the first half of February time to honor Brigid. It’s worth noting that the Catholic Church transformed Brigid to St. Bridget and honors her on February 2 with the creation of the holyday known as Candlemas.

In pre-Christian times, women would gather on the hillside and light a bonfire to honor the Brigid as the protector of cattle, for in those days, having cattle signified true wealth. For many years, in the town of Kildare, a perpetual flame was tended by 19 devotees of Brigid, each woman keeping the flame for one day. It was believed that Brigid, herself, tended the flame on the 20th day.

The flame was extinguished in the 16th century when all the monasteries in Ireland were suppressed. And then, in 1993, right in the market square of Kildare, the flame was rekindled by the head of the Brigidine nuns, and has burned ever since. I’m reminded of the perpetual flame lit in November 1963 at the grave of John F. Kennedy in Arlington National Cemetery. A perpetual flame is a universal symbol of everlasting life.

Brigid goes by many names and has roots in many countries. Whether you call her Brigid, Bride, Briga, Brigantia, Brigandu, or Saint Bridget, whether you connect with her energy on February 1st or 2nd, or throughout the first half of the month, Imbolc marks the time in the cycle of nature when we can see tangible evidence that the Sun – a perpetually burning, universal symbol of everlasting life – is on his way back to our world.

Time to Plant a President

As I write this post, the temperature in CT is -3. To the folks in Minnesota, this is balmy! And yet, Imbolc marks the beginning of the agricultural year. This is when farmers, in an expression of both determination and optimism, would hire the hands they anticipated needing for the harvest, still many months away.

This practice is not unlike what’s happening now as Democratic candidates declare their intentions to run for president in 2020. There are only so many qualified campaign managers and experienced staffers on the A-list. A candidate who wants to work with the best needs to declare early.

One of the reasons I created Ritual Recipes was to offer safe and simple rituals to mark the cycles of nature, what my ancestors celebrated as the Wheel of Life, or the Wheel of the Year. There are eight spokes on that wheel: the two solstices marking summer and winter, the two equinoxes marking spring and fall, and four fire festivals, known as cross- quarter festivals, that occur between them. Imbolc is one of the four cross-quarter festivals.

A Ritual for an Individual

Here’s a safe and simple ritual for an individual who wishes to connect with the energy of Brigid.

Select a candle, red for fire or white for water.

The symbolism is what’s important and it needs to mean something to you.

Ritual is a visible act performed with invisible intent. If you seek strength, place the skillet or chain or hammer and nail next to the candle. 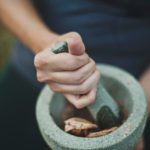 Grinding ingredients in a stone mortar and pestle

If you seek healing, place the mortar and pestle, the Band Aid, or beer, or bowl of water next to the candle.

If you seek your voice, place the journal, the book, the newspaper, the Scrabble tiles next to the candle.

Vow to use the symbol you chose, in one way or another, every day for the next 19 days.

Now light the candle and immediately use the symbol you chose. You might simply place the chain around your neck, or sprinkle your face with water from the bowl, or open your book at random and read the page you land on. 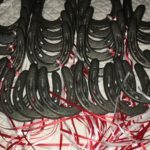 Horseshoes decorated with red and white ribbons, ready for transport to the festival of Imbolc

For another simple Imbolc ritual, listen to Episode 2 of Ritual Recipes. In it, I share a ritual using root vegetables and the magic of potatoes, carrots and onions. In that episode, I also share a more substantive Imbolc ritual involving horseshoes.

Every year, at the beginning of winter, swans emigrate from Iceland to Ireland where they stay until the early signs of Spring. So when the swans left Ireland, people knew it was a sure sign that winter, too, was leaving and spring was on the  horizon.

Pilgrims would go to one of Brigid’s sacred wells and tie prayer cloths to the branches of nearby trees. These prayer cloths were white and called “clooties.”  Some say the cloth was white to symbolize the swans.

When we began the ritual, I gave everyone two white ribbons. During the ritual, participants added a few drops of essential oils to the water in the healing well. We used frankincense, myrrh, cinnamon, mandarin, patchouli, and vanilla. The fragrance was magical! Then we sprinkled the fire herb of rosemary onto the water. 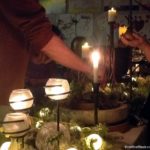 A ritual participant sprinkles herbs on the water

We each took three steps to connect with the energy of Imbolc:

First, though it was still bitterly cold outside, we bid farewell to winter.

We dipped both of our white ribbons into the well. While doing so, we visualized what our lives would be like when winter was truly gone and spring had returned.

Then we each tied one of our ribbons onto a branch of the makeshift tree. We held on to the other ribbon.

The second step was to honor the milk in the womb of the Great Mother.

Meg Peterson, owner of the shop, had a large potted plant. Each of us poured a few drops of milk onto the soil. We talked about who or what  we can nurture, and about who or what nurtures us. I encouraged everyone to be open to signs that life continues.

Our final step was to make a statement of faith, optimism, determination. I was sure no one at the ritual was hiring hands for a future harvest, so I asked: What other statement of faith can you make about yourself and your personal harvest? It’s an idea that blends goals with affirmations.

The other ribbons we had dipped into the well carried the scent of the ritual. I told everyone to tie that ribbon onto something at home.  Make sure you can see it. Let it remind you of the faith you have in yourself. Visualize your life blossoming with creativity, with renewed energy, strength and health.

Of course, you can live your life without ritual. You can flip the pages on a calendar or watch the date change on your cell phone. You can feel like a hamster running inside a wheel and a year later wonder where the time went.

Or you can connect with the cycles of nature, honor the spirit of the ancestors, discover the patterns of your life, do something to add positive energy to the world. The world needs what you have to give.