Ritual: GIFTS FROM THE DRAGONS by Zita Christian

To create meaningful rituals for Couples who don’t want a religious ceremony, I often incorporate their cultural heritage. For Jason and Ei-ling, I explored Polish wedding customs and Chinese mythology. I created several rituals for them. You’ll find one of them, “Destiny and the Red Cord,” in another post. 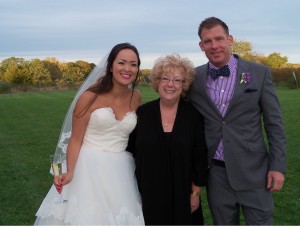 Jason and Ei-ling’s ceremony was held on the coast at the Saltwater Farm Vineyard in Stonington, Connecticut. Alas, because of a scheduling challenge, Gifts from the Dragons was eliminated from the ceremony. I hope to invite the dragons to another wedding. Below is the text of the ritual along with stage direction so you can envision how it might unfold. I found the stones at Universal Companies. You can make your own using a gold metallic Sharpie and black polished river stones. 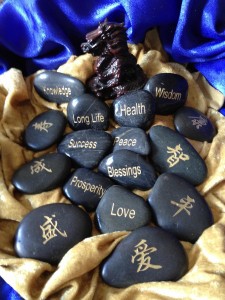 Celebrant:
For as long as couples have gotten married, friends and family have shown their support by giving gifts. Couples today might receive anything from a set of dishes to a set of luggage. In earlier times, the gifts were different. In some cases, so were the guests. In fact, legend has it that in both China and western Europe, dragons might come to a wedding…and if they did, would bear very special gifts.

The dragons I speak of are those beings of splendor whose lore and legend portend harmony, protection, and riches of all kinds. The four great Chinese dragons live in grand palaces beneath the water. With the Saltwater Farms Vineyard so close to the sea, I suspect there have been more than a few sightings. I can’t say for certain how many dragons there are in the mountains of Europe, but I do know Harry Potter’s friend Ron has a cousin who trains them.

I have it on good authority that on this very day nine dragons converged in this vineyard. Each left a gift for Ei-ling and Jason. Would the dragons’ representatives comes forward and present the treasures?

8 guests come forward, make 2 rows facing each other.
Celebrant gives each a particular stone. On one side is carved a word in English; on the other is the Chinese character. Guests come to the Couple in pairs, say the phrase below and place the stone in a decorative bowl. After placing the stones, guest go back to their seats in pairs.

Celebrant:
From the ancestors of both Ei-ling’s and Jason’s families, I bring the 9th and final gift: LOVE