I wrote this ritual for Bill and Chelsea’s nautical themed wedding at historic Mystic Seaport in Mystic Connecticut. I’ve included the stage direction so you can visualize how the ritual was enacted. As the wedding officiant, I’m identified as “Celebrant.” 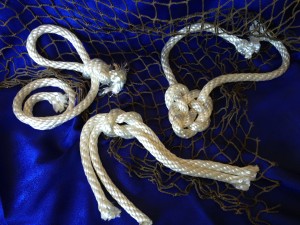 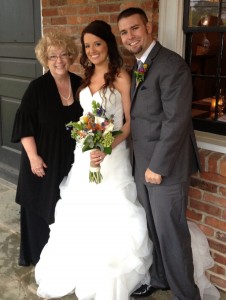 Celebrant
Here in Mystic Seaport, the history and lore of sailing surrounds us. Knots are a big part of that world. We associate knots with sailors. But they aren’t the only people known for tying knots. Knots are a part of our life, too. We tie ribbons in hair and cord on packages. We tie the laces on shoes, the drawstring on sweatpants, the belt on a bathrobe. Some of those knots are to ensure something works; some are simply for beauty. It was the same in the Old World, too, particularly for the Celts. In fact, when sailors from the Old World embarked on a long ocean voyage, they often carried a sea bag of what they called “fancy work.” When the voyage ended and the sailors returned to port, they had made belts and bracelets, rings, and hair ornaments – gifts for family and friends, particularly for a sweetheart.

When a wedding followed, there would be more gifts. In fact, for as long as couples have gotten married, friends and family have shown their support by giving gifts. Couples today might receive anything from a kitchen blender to a crystal bowl. In much earlier times, wedding gifts symbolized qualities desired in a marriage. Harkening back to those days, and in honor of Groom’s love of boating and Bride’s love of the beach, I now invite the presentation of three special knots.

Guest #1 comes forward and gives a piece of white rope appropriately tied and reads from a card:
“The Arbor Knot is used to tie new line to the reel. It’s the first knot you need to learn. It’s made of two ordinary, everyday, overhand knots. It doesn’t have to be that strong and it’s easy to learn. May this knot always hold your hearts with love.”
Guest #1 places the knot on the altar and returns to his/her seat.

Guest #2 comes forward and gives a piece of white rope appropriately tied and reads from a card:
“The Lovers’ Knot holds two halves together equally and prevents either one from fraying. May this knot always hold your hearts with love.”
Guest #2 places the knot on the altar then returns to his/her seat.

Celebrant
And finally, the Marriage Knot.

Guest #3 comes forward and gives a piece of white rope appropriately tied and reads from a card:
“The Celtic Marriage knot creates a weave of several paths into the shape of a heart. The pattern represents the idea that when two people independent and whole unto themselves are joined by love, the weave they create makes them stronger and more beautiful together than either was before. May this knot always hold your hearts with love.”
Guest #3 places the knot on the altar and either returns to his/her seat or reads “The Art of Marriage” by Wilferd Petersen, a perfect reading to accompany this ritual.