Want a meaningful way to celebrate the holiday season? 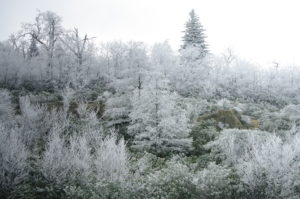 A wintry scene taken by my brother-in-love Len Lipp

It’s early-December. Here in the northern hemisphere, the days shrink as darkness, unstoppable since the Summer Solstice last June, relentlessly nibbles the light. This battle between night and day is as old as time. And things are about to change.

The balance of power will shift on December 21, date of the Winter Solstice for 2017.  The sun, having reached the end of his journey to the southern hemisphere, will stop and begin his six-month trek back to us. Though we aren’t likely to see tangible evidence of the sun’s return until February when the minute-by-minute increase of light will have accumulated enough to notice, we have scientific evidence that the sun will, indeed, return. 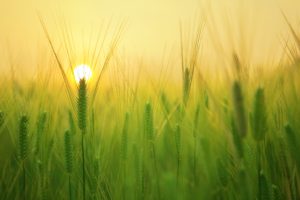 My European ancestors didn’t have assurance from science. Their uncertainty was shared by the community. People relied on the sun’s heat to thaw the land so they could till the soil and plant seeds. They relied on the sun’s light in order to work and be productive. They grew their own food. No harvest could mean starvation, not just for a few, but for all. Life itself depended on the sun. I can imagine their anxiety at this time of the year.

In their own way, my ancestors would have been aware of the sun’s annual journey. Still, in a climate of uncertainty and anxiety, fear could easily take hold. What if the sun didn’t come back this time? What if, this time, the sun got lost?  To direct the sun, the people lit bonfires on hilltops, like runway lights at an airport, or candles in a window.

To welcome the sun, they copied his image by shaping evergreens into circles and hanging the circles on their doors and windows. Symbolically, they invited the sun’s eternal life into their homes by decorating with more evergreens. Though I’m certain of the sun’s return later this month, tomorrow my husband and I will hang a wreath on our front door.

Astrologers mark the Winter Solstice as the moment the sun enters zero degrees of the sign of Capricorn. Ruled by the planet Saturn, Capricorn is associated with the passing of time, with patience, with testing the foundations of our life, with finding practical solutions, with ambition.

At the Winter Solstice, the principles associated with Saturn encourage us to look back and reflect on the year gone by.  As though we’re students in the school of hard knocks and Saturn is the dean, we are to grade ourselves and plan a course of improvement. In mid-December, the Roman held the Saturnalia, a celebration that released rules and restrictions in favor of feasts and games, of drinking and giving gifts. The role between slave and master was reversed, though I doubt seriously so. 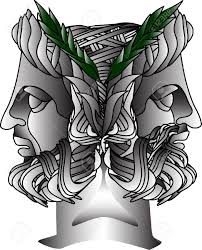 The two-headed Roman god Janus looks to the year gone by and the year to come.

The Romans began their new year in January. Janus, the god with two heads facing in opposite directions, ruled the transition between past and future, between old and new. We look to the past and to the future when we make a New Year’s resolution.

If you feel the season has become too commercial and you’d like to celebrate in a more meaningful way, consider these two rituals. The first is simple. 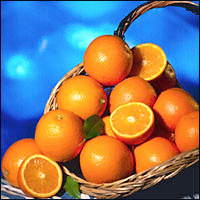 A basket of oranges from WPClipArt

Eat the Sun.  Hold an orange. Imagine it as the sun. Think of its association with heat, light, good health, generosity, and cause for celebration. Peel it with your hands. Inhale the fragrance. In his book, A Compendium of Herbal Magick, author Paul Beyerl explores the fruit in mythology and suggests “…they can be associated with modern quests, used to strengthen the seeker or to reward the victorious.” What a powerful idea, especially if you’re making a challenging resolution. Buy a bag of oranges. Nourish yourself with the sun.  Share the energy with those you love.

Light a Path.  For a more ceremonial ritual, gather with friends and light a path for the sun. For the last few years, I’ve led a Winter Solstice ritual at Meg’s Inspirations, a spiritual boutique in Manchester, CT.  Meg sets up three long tables, end to end, and covers them with fresh evergreens. I build a bridge the length of the three tables with small logs cut by Meg’s husband, Ed. He drills a hole in each log and Meg inserts a candle of red, green, or white. 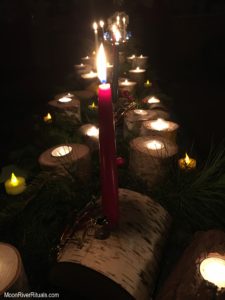 A Winter Solstice ritual that builds a bridge to the sun.

The Wheel of the Year is turning. However you celebrate the season of light, of gifting and feasting, of friends and family, of recollections and resolutions, do so with meaning. For a simple first step, play The Beatles’ Here Comes the Sun.  J

Thank you. As you reflect on the year gone by, may you find wisdom. As you look to the year ahead, may you find courage. As we draw closer to the longest night of the year, may you know faith. All are gifts of the season.