On the evening of July 16, I left the ICU with a mission. Liz had outlined the entire book but had written only about a third. She feared that if she couldn’t meet the extended deadline, the book might never be published. Liz identified five friends, all members of the International Women’s Writing Guild. As soon as I got home, I emailed them. I explained the situation and asked for what I knew would be a huge commitment of time and effort. In under 24 hours, I had their responses: Yes!

On the day we all arrived at Judy’s house in Wellfleet, Liz called from the hospital and spoke with each of us about how much it meant to her that since mid-July we had put our lives on hold to finish her manuscript.  We, in turn, let her know how lucky we were to have a friend for whom we would so eagerly make such a sacrifice. She asked each of us a question, too. I’ll get to that in a moment.

You see, on Mother’s Day that year, Liz had suffered the first of a series of heart attacks. By mid-July, she knew she’d never meet that second deadline. With Liz’s permission, I called her editor. I conveyed the gravity of the situation and that a group of us, hand chosen by Liz, wanted the green light to finish her book. We would write in Liz’s voice as best we could. We wanted nothing in return — no money, no acknowledgment. I had assembled brief bios, including writing credentials, on all six of us, and offered to email them to her.

For those not familiar with how publishing works, this arrangement was unheard of. The book was already in the production schedule. Work had begun on the cover. Advance sales efforts would begin soon. The book had to be ready in time. Shana brought our request to the editor-in-chief, the publisher, and their legal advisors. In only a few days, she told us how honored Sourcebooks was to be part of this beautiful project of the heart.

The six of ramped up our efforts. We turned in the manuscript a few days late. Shana understood the challenges on our end and got to work immediately on the edits. She knew we planned to meet on the Cape to work on the book in person.  Meanwhile, Liz took a turn for the worse. Emergency open-heart surgery did not deliver the miracle we’d hoped for.

The first round of edits arrived just before we gathered on the Cape. We were going through them when Liz called.  Her question to each of us: What we had learned in finishing her book?

For me, it was seeing how much pain she’d hidden all these years behind a smile. I learned how carefully she always avoided talking about Nathan’s death.  She had lived through every parent’s nightmare and knew that talking about it made people uncomfortable, enough to drive friends away. Not us.

Judy’s home was on the water. To access the beach, all we had to do was step outside and descend a long, steep set of stairs. Earlier that day, after we’d all unpacked, we combed the beach. I had asked everyone to look for two beautiful stones. That night, after our phone call with Liz, we gathered on the deck in a ritual to honor our friend. We painted a word on one of our stones, some sorrow we hoped Liz’s spirit was ready to shed. 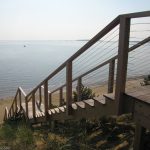 Steps to the ritual on the beach

On our last evening, we walked down the steps again and gathered in a circle for a releasing ritual. We envisioned Liz’s body free from pain, her mind free of depression, her heart free of sorrow. One by one, each of us walked out at low tide. Each of us prayed in our own fashion. And then we threw our stones as far as we could. 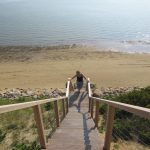 Climbing stairs from the beach.

Like the others, I climbed back up the steps with the second stone in my pocket.  On that second stone, each of us had written a word or drawn a symbol of Liz’s strength, some quality that enabled her to get through those painful years.  Those stones reflected her humor, resilience, loyalty, compassion, wisdom, and more. We would keep our stones and honor Liz by keeping her gift alive.

Liz Aleshire died on October 13, 2008.  She lived long enough to see the cover of her book. The nurses in the cardiac ICU at Hartford Hospital taped it to the wall so Liz could see it.  The book was published in the spring of 2009. …I can think about Liz now and not feel that gut-wrenching pain. Maybe that’s because I have a literal touchstone.  On mine, I wrote “Friendship.”

Sourcebooks asked me to write the foreword to the book. I wrote about a tough, tender, talented woman who kept a table-top Christmas tree up all year, who turned her grief into a gift for others. I also wrote about the six of us who finished the manuscript:  Kathy Barach, Marsha Browne, Judy Huge, Paula Chaffee Scardamalia, the late Anne Walradt, and me, Zita Christian.

Letting Go and Holding On — That’s how I think of the two rituals I created for Liz. Years later, I used them to inspire funeral rituals for others.

In her will, Liz asked that I conduct her funeral. I did. I based it on her love of quilts. I’ll tell you about that in another episode.

In the meantime, thanks for listening. If you’re so inspired, please subscribe, wherever your feast on your podcasts. And please share the episode with a friend. It’s like sharing a recipe — a Ritual Recipe.

Zita brings “Happily Ever After” to life. She is a wedding officiant, ordained interfaith minister, a certified Life-Cycle Celebrant®, playwright and multipublished romance novelist. Through Moon River Rituals, Zita creates customized ceremonies for individuals, couples, families, and communities in CT, RI, MA, and NY. She is a proud supporter of marriage equality. To see her handfasting cords, visit www.etsy.com/shop/MoonRiverRituals and www.Facebook.com/MoonRiverRituals. Zita also hosts and produces three television shows: Weddings with Zita, Page 1 and Full Bloom. Watch them on YouTube.com/ZitaTVNetwork. For information about Zita's writing, visit www.ZitaChristian.com, Yes, she wears many hats
View all posts by Zita →
This entry was posted in Friendship, Funerals, Life in General. Bookmark the permalink.