Years ago, I wrote about this experience.  I’ve drawn on that blog post to create this episode of the podcast. The event remains key to my understanding of the power of ritual.  ~ Rest in peace, Grandmother Mechi.

Little Elk, schooled in the healing ways of the Pueblo, she was his destiny.  He knew from a childhood vision that before he died he was to anoint a Medicine Woman, but she wouldn’t be Pueblo.  She’d be Cherokee.

To me, Mechi Garza was a friend, a writer, a teacher, a woman whose striking mixed-blood beauty was not diminished by more her years, whose wisdom was often bottled with laughter, or tucked in the gentle squeeze of her hands.  That I am the one writing about her surprises me. It wouldn’t surprise her. Lothar had told her to tell the story to Zita. That Mechi and I didn’t know each other at the time didn’t faze her. She knew the day would come. 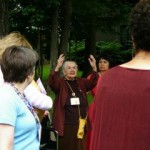 Another year, I did a Summer Solstice ritual with Medicine Woman Mechi Garza

I met “Grandmother Mechi” in 1996 at the week-long, annual conference of the International Woman’s Writing Guild where we each taught.  I’m a romance writer; my class was on genre fiction. Mechi was a Choctaw-Cherokee tribal elder; her class was about finding the medicine woman in every writer.  I took her class. She took mine. When the week was over, we knew we would become friends.  She said it was destined.

Four years later, in the fall of 2000, Mechi invited me to attend one of the most significant events of her life.  She was to be officially installed as a Medicine Woman, a validation of the work she had been doing for 30 years. I had never been to any kind of ritual, much less one like this.  I couldn’t buy a plane ticket fast enough.

The ceremony would be conducted by Art Tequaecshe, “Little Elk,” a Medicine Man from New Mexico, an acclaimed potter, and Marine veteran from the 1950s.  That he didn’t know Mechi at the time of his childhood, prophetic vision didn’t faze him. He knew the day would come.

So it was that the three of us gathered in a meadow on a mountain in West Virginia on a cold October weekend in 2000 to meet our destiny.   I was the only one who didn’t realize it. I had come as a guest. I had planned to take both pictures and notes, perhaps for use in a future novel.  But destiny is a wide road. Mechi asked if I would be part of the ritual and something stirred inside. I was being offered the Holy Grail. 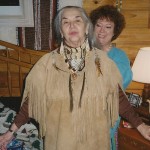 Assisting Mechi Garza as she prepares for her ceremony

I was one of several attendants who helped Mechi get dressed: brown buckskin for the first day’s ceremony, soft white leather tunic and leggings for the second day.  On that second day, I listened as Wind Walker, lead drummer from the Turkey Clan, circled the perimeter calling the four directions. I listened as Little Elk chanted the ancient words he had learned from his grandmother.  I listened as Mechi, once initiated, blessed each of us and gave new names to those who asked. I watched two hawks circle overhead.

People from all over the country came for the ceremony.  The making of a Medicine Woman is a significant event. In truth, my participation was not significant to the ritual itself.  To me, it was life-changing. I remember standing behind Mechi who was seated in a lawn chair, bundled in blankets and fur. I placed my hands on her shoulders, not to reassure her but to keep me anchored in reality.  Ah, but Mechi had only one moccasined foot in this world, something I should have realized. As the procession around the meadow grew longer, the drumming stronger, and Mechi ever more still, I felt a current rush from her shoulders and into my palms.  Had I just shaken hands with Lothar?

Eight years later, Mechi and I were again in ritual together.  This time the ceremony was to close the week-long writers’ conference where we’d first met.  This time, I officiated. Four hundred women had journeyed from all over the world to be there.  For many of them, the emotional discoveries made that week had been profound. I asked Mechi to help me hold the energy.   Again, I stood behind her, my hands on her shoulders. This time she was in a wheelchair.

I have yet to find the right words to describe how it felt to be in ritual with her again, to stand behind her, my hands on her shoulders… to feel the vibrations of change from the woman who showed me my destiny. … Mechi Garza, died in the autumn of 2017. 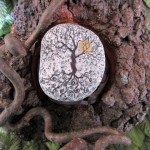 If you’ve listened to some of the other podcast episodes, you know that I often use stones in rituals. Some have words carved into them, or written on them. Some are painted by my friend, artist Carol Chaput, to look like fanciful owls for a baby naming ceremony, or with the image of a lotus or a tree or to be used as oathing stones when a couple makes their wedding vows. … I’ve always been drawn to the energy of stones. They connect us to the realm of the ancestors and symbolize all that endures.

Before I left for West Virginia and Mechie’s ceremony, I filled a small pouch with stones chosen from my personal collection. Several were ones I found over the years while visiting my dad in South Dakota. My grandparents were homesteaders and used to lease grazing land from the Sioux. We’d always drive out to visit the old “home place” and I’d always find a stone or two or ten. I thought perhaps Mechi  would place the stones I gave her around her computer, like I do, or tuck a few into special plants, like I do, or place them in an offering bowl on her altar, like I do. I did not expect her to open the pouch and cry. But that’s what she did.

She explained that preparation for her ceremony began with Little Elk the week before and included a series of tests. The most challenging required her to give up the leather pouch of healing stones she had carried for decades. She must trust that, in some way, the stones would come back to her.

In the world of social media, we talk about influencers, people who shape our thoughts.  Sometimes, it takes years for us to realize how we’ve been influenced by someone. I can’t say that creating this podcast episode made me think of Mechi Garza. I think about her every time I pick up a stone.